On Friday 20 September 1989 in his Grey Lynn studio Julian Dashper signed, dated and inscribed the title on the back of his painting The Grey in Grey Lynn. The taping and brushwork had only taken ‘about a day’ but in case that sounds too hasty you need to know that the preparation had been lengthy. The canvas had first been undercoated with six to seven layers of gesso which is about five to six more layers of gesso than Dashper would usually apply.

The gray in The grey of Grey Lynn

The paint that Dashper used was Liquitex 599 Neutral Gray. That’s spelt g r a y unlike the grey in Grey Lynn. 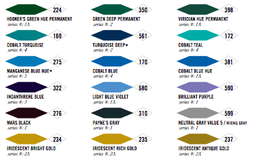 Of course the actual Grey in Grey Lynn is Sir George Grey, twice Governor and also Premier of New Zealand back in the nineteenth century. The Lynn bit comes from Scotland where it refers to a water feature or a pool. Anyway, Dashper didn’t use much gray as it happened, just brushing on ‘one extremely light layer’ of the Liquitex over the top of the gesso background. You can still see the white of the gesso coming through.

The title of the Dashper painting came via art historian Tony Green who was also responsible for the title Male order. At the time he was making The grey in Grey Lynn Dashper was soliciting titles from critics, curators and others in the art world. The first to contribute was Christina Barton who offered ‘Cresting waves’. As Dashper related, “She came into my studio and saw that work and said ‘what’s that work called, ‘The Cresting Waves’? And I just said ‘yes’”. These title ideas were not proposed but came out of conversations. Green remembers saying “something that Julian thought would make a good title [The Grey in Grey Lynn] -- & [he] kindly acknowledged my 'input'.“ (*) Dashper himself recalled “getting about 15 to 16 titles” this way but stopped the practice when “people came in with titles already in mind.”
(*) email from Tony Green 25.02.14

As with the other paintings in this ‘series’ another painting looms large as a primary source: Colin McCahon’s Here I give thanks to Mondrian. Compositionally its presence is evident in the angled masked shape that comes in on the right and conceptually through the ‘expressionist' paint that covers the masking tape which is almost certainly a reference to McCahon’s own words about his Mondrian painting. “As a painter how do you get around either a Michelangelo or a Mondrian. It seems that the only way is not more ‘masking-tape’ but more involvement in the human situation.”  (*)

Dashper didn’t take the taping of this painting lightly and “didn’t start with the idea of leaving the tape on.” He did see though the advantage it gave him in combining hard edge technique and expressionism with the hard edge concealed beneath the tape. “I am interested that people know there is a straight line under the tape…. they are not allowed access to but they know that it is there. .. the straight line is only suggested, I am the only one who knows if it is actually there.”

Dashper described the masking tape he uses with its familiar colour and width as “a painter’s tool.” He added, “the masking tape being what it is, it will eventually dry, go brown and peel off….I like the willful obsolescence involved in it… a built in archival failure that helps build the tension.”
(*) Colin McCahon: a survey exhibition, catalogue published by the Auckland Art Gallery, 1972

A short history of masking tape. It was invented in 1925 by 3M employee Richard Drew. He observed auto-body workers’ frustration when they removed the butcher paper they had taped to cars to guide their painting and the strong adhesive on the tape peeled off some of the paint they had just applied. Touching up the damaged areas increased their costs. Drew realised the need for tape with a gentler adhesive. (*)
(*) thanks Wikipedia

The ambiguity between paintings and objects and the foregrounding of the processes of art and its distribution was always at the center of Dashper’s work. Extended stretchers, deconstructed framing and a constant pressure on the audience to consider what is and what is not part of the painting. In the case of The grey in Grey Lynn the unfolded canvas on each of its four corners does some of the heavy lifting in this cause. By leaving the corners unfolded Dashper could give one more unsettling (albeit false) signal that perhaps the work was unfinished. “It also tells you a lot about the process of making from the object up.”

The grey in Grey Lynn was first shown at the Sue Crockford Gallery in 1990 and later purchased by Jim Fraser.

On Thursday 9 November 2006 Fraser sold his entire collection, including a number of Dashper’s works, in a one night Webb’s auction. This single collection sale was one of the first of its kind and The grey in Grey Lynn ( lot number 57) was hammered down to The Museum of New Zealand: Te Papa Tongarewa for $8,000 plus some commissions.

The grey in Grey Lynn was one of a number of paintings using a similar composition. Dashper often worked in series, though not in the way you might imagine. “I think a lot of people get confused by my paintings because they think there are going to be a whole lot following each other. But what happens is I paint a series but only pick one to represent the series each time.” In the case of The grey in Grey Lynn there were at least three other companion works that didn’t see it through. One of them (the pink one) was to be called Three bananas. 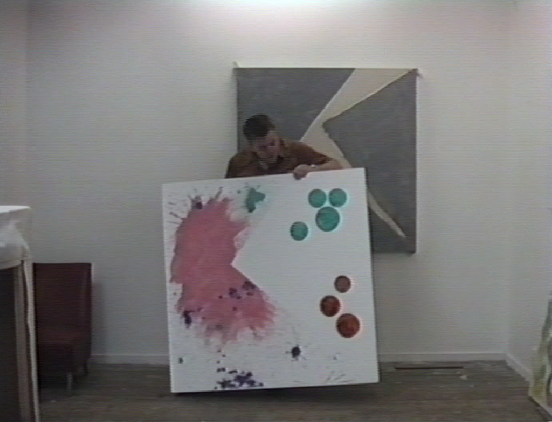 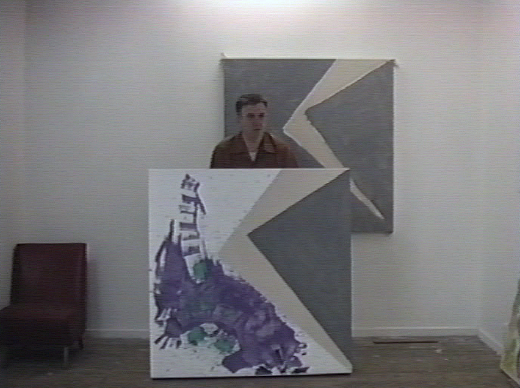 Another of the rejected paintings in the set
The other thing about these different versions was their three dimensionality. At least three of them were stretched over wide box stretchers bringing them out from the wall and fitting in with Dashper’s goal to present these works as objects rather than traditional paintings.However none of them passed muster. “It’s dead, and it’s heavy too!”

Dashper was never one to let anything go to waste though. “[I] don’t paint over failures, [I] take the canvas off” and then it is reused. “ 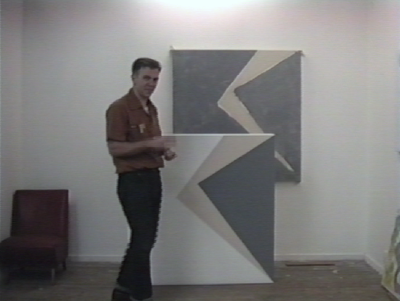 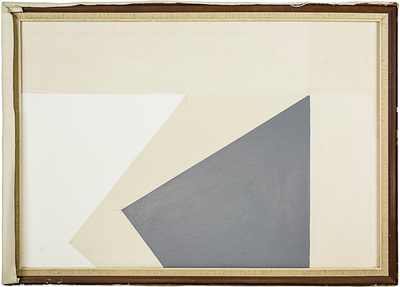 Left: Julian Dashper in front of The grey in Grey Lynn with one of the 'failures'. Right: a cut out section of the 'failed' painting re-presented as Sound barrier 1990 now in the Chartwell Collection, Auckland.
Another painting that sits alongside The grey in Grey Lynn is I believe that children are our future (DC Day). It was shown at the Peter McLeavey Gallery in 1990 and purchased by Les and Milly Paris out of McLeavey’s stock room four years later. It is the same size as The grey in Grey Lynn but Dashper showed it on the diagonal “which made it look much bigger”. 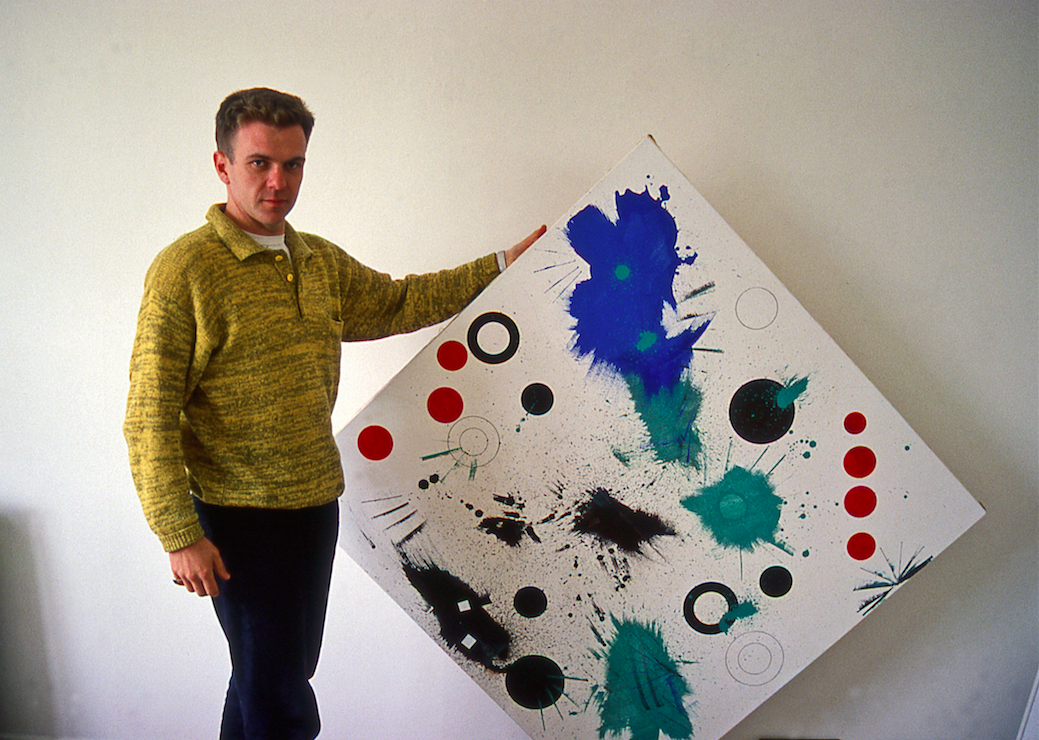 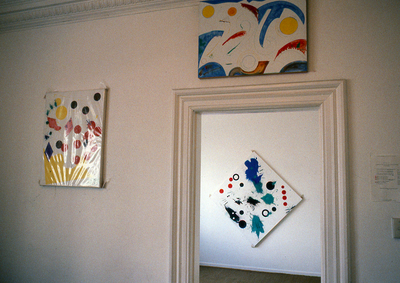 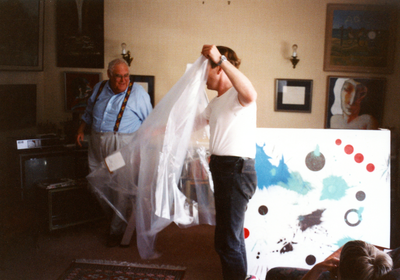 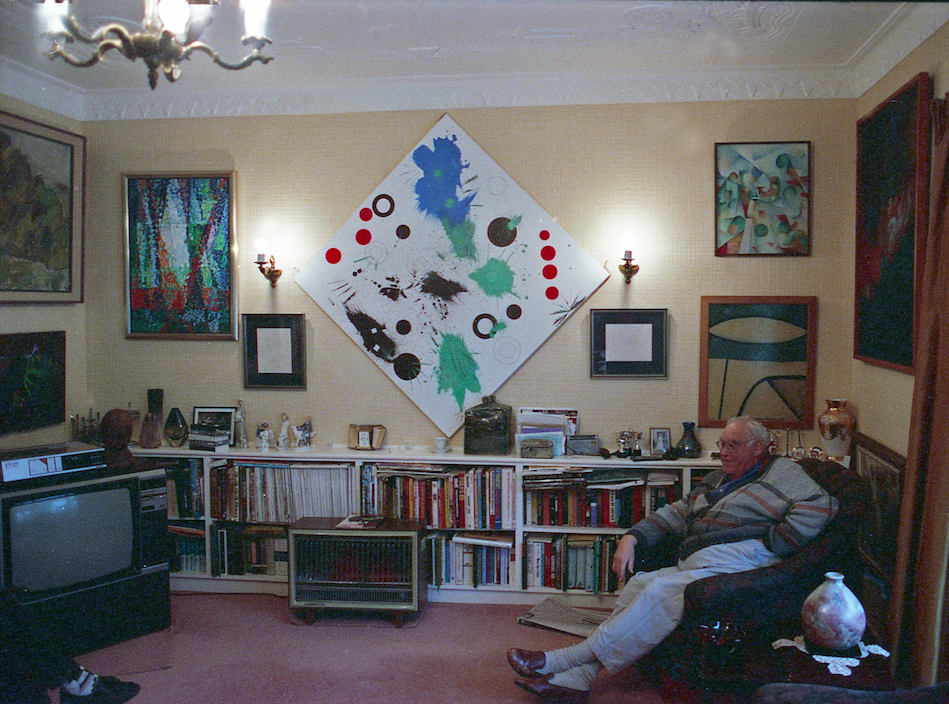 To sum up then and in Julian Dashper’s words

“This painting (The grey in Grey Lynn) is about tension and the implications of tension…..Is the painting finished? Of course it is, but I’m very interested in the fact that a viewer would have a problem with that."

NOTES: The quoted material in this piece, and some of the images, comes from an extended video interview we did with Julian on 20 October 1989, a couple of months after The grey in Grey Lynn was completed (you can see this video here on Circuit). All the photographs (with the exception of the Liquitex colour chart) are free for reproduction under the Creative Commons agreement. And thanks to Tony Green for information on his 'titling' of the work. The grey in Grey Lynn was purchased by the Museum of New Zealand: Te Papa Tongarewa in 2006 and remains in their collection.
Proudly powered by Weebly